Take a peek behind the scenes at Michael Kent’s first shoot with me. Many of our guys first shoots happen in the bathroom. It’s a great way to get the guys mostly naked to see how they go being semi and fully naked in a photoshoot. It’s also a great way to get some speedo/nude/wet photos. In this case Michael was about to soapy up naked in the shower. Being the middle of summer Michael was really tanned for this shoot. So the soapy really stood out on his skin. I ended up pouring a lot of the soap over his bum to get is really soaped up. Later I get him up soapy up near the window wanking his dick hard. I really like the photos from this set. Michael’s a really nice guy too.

This is the first photoshoot I did with Michael Kent when we met early in summer. I wanted to get some shots of this straight British boy in the shower before heading to the studio. I wanted a simple shoot with Michael in some skimpy shorts and naked in the bathroom. He’s pretty easy going and was happy to strip off in the bathroom and soap up in the shower while I grabbed a load of shots. Being the beginning of summer Michael is very tanned, and really fit. Being a perfect warm day he rode his skateboard across the city to meet me. Michael’s photos look great and I really enjoyed shooting with him. Before he headed off on his travels I got a chance to shoot with him out on the roof. I will post that shoot soon.

Sexy British boy Michael Kent is back this week stripping naked in my apartment. The handsome traveller was staying in Melbourne over the summer and dropped in for this quick shoot before heading to northern Australia. I learnt that Michael is a really sweet straight boy who is travelling to see the different areas of Australia. It was really interesting talking to him about his travels. The fit 27 year old had no trouble stripping naked while I filmed him in his last shoot. So we planned to do a similar shoot today. While he was over we also go some nude shots outside which I’ll also post soon. I will also post his new video this week.

This is the BTS video footage from my first shoot with handsome British straight boy Michael Kent. I had Michael come around to the studio for his first shoot a few weeks ago. I was really impressed that he had ridden his skate board into the city from a couple of suburbs away. Michael is very fit and really tanned. He has being making the most of the start of summer in Australia. He’s very laid back and has no problem getting naked while I take his photos. I love his British accent too. I like Michael’s photoshoot and his video a lot. I’m going to get him back for a follow up shoot very soon.

We’re kicking off the summer season of shoots with our newest mate Michael Kent. The 27 year old Brit contacted me a little while ago about doing some modelling on the site. I love British guys and thought Michael looked hot in the photos he sent me. So I quickly organized a day for him to come over for his first shoot. The first shoot is usually a chance for us to meet and get to know each other during a simple solo photo and video shoot. Michael has had a little experience doing some nude modelling before. So he was comfortable getting naked in front of me. I noticed that he’d ridden a skateboard over from the suburbs of Melbourne so we included one of the boards in the shoot. Though we didn’t get a chance to photograph him riding this time. He’s very laid back and easy to talk to. I love his long hair and large body tattoos. Later this week I will load up Michael’s first video. I’m looking forward to getting this beautiful Brit back in the studio for more shoots over summer. 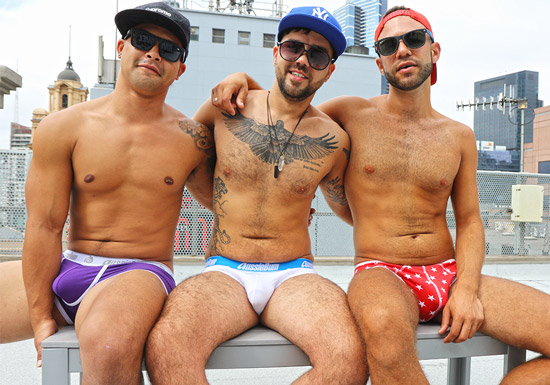